Perspective: Blockchain and a Decentralized Internet¶

Probably without giving it much thought, users have invested enormous trust in the applications they use, especially those like Facebook and Google that not only store their personal photos and videos, but also manage their identity (i.e., provide Single Sign On for other web applications). This is troubling to many people, which has sparked interest in decentralized platforms, systems for which users do not have to trust a third-party. Such systems often build on top of a cryptocurrency like Bitcoin, not for its monetary value, but because cryptocurrency is itself based on a decentralized technology (called a blockchain) that no single organization controls. It’s easy to be distracted by all the hype, but a blockchain is essentially a decentralized log (ledger) that anyone can write a “fact” to, and later prove to the world that that fact was recorded.

Blockstack is an open source implementation of a decentralized platform, including the blockchain, but more interestingly, it has been used to implement a self-sovereign identity service for Internet applications. A self-sovereign identity service is a type of identity service that is administratively decentralized: it has no distinct service operator, and no single principal can control who can create an identity and who cannot. Blockstack uses a commodity public blockchain to build a replicated identity database log. When this database log is replayed by a Blockstack node, it produces the same view of all identities in the system as every other Blockstack node reading the same view of the underlying blockchain. Anyone can register an identity in Blockstack by appending to the blockchain.

Instead of requiring users to place trust in a distinct set of identity providers, Blockstack’s identity protocol instead asks users to trust that the majority of the decision-making nodes in the blockchain (called miners) will preserve the order of writes (called transactions). The underlying blockchain provides a cryptocurrency to incentivize miners to do this. Under normal operation, miners stand to earn the most cryptocurrency by participating honestly. This allows Blockstack’s database log to remain secure against tampering without a distinct service operator. An adversary who wishes to tamper with the log must compete against the majority of miners to produce an alternative transaction history in the underlying blockchain that the blockchain peer network will accept as the canonical write history.

Identities in Blockstack are distinguished by user-chosen names. Blockstack’s identity protocol binds a name to a public key and to some routing state (described below). It ensures that names are globally unique by assigning them on a first-come first-serve basis. 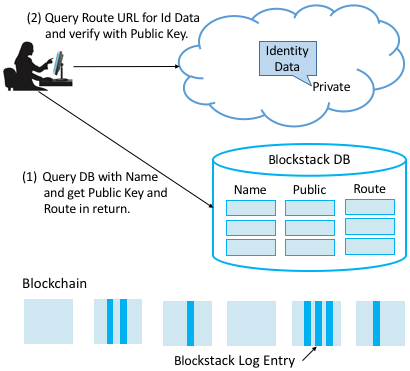 Putting it all together, Figure 215 shows how resolving a name to its corresponding identity state works. Given a name, a client first queries a Blockstack peer for the corresponding public key and routing state (Step 1). Once it has the routing state, the client obtains the identity data by resolving the URL(s) contained within it and authenticates the identity information by verifying that it is signed by the name’s public key (Step 2).

To continue reading about the cloudification of the Internet, see Perspective: The Cloud is the New Internet.

To learn more about Blockstack and decentralizing the Internet, we recommend: Blockstack: A New Internet for Decentralized Applications, October 2017.